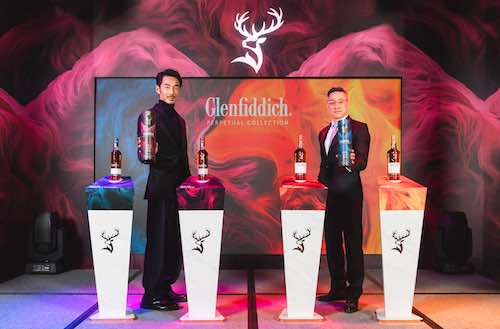 William Grant has partnered with Ever Rich Duty Free and Tasa Meng to introduce its Glenfiddich Perpetual Collection to Taiwanese travel retail.

William Grant has partnered with Ever Rich Duty Free and Tasa Meng to introduce its Glenfiddich Perpetual Collection to Taiwanese travel retail. To support the launch, the brand’s ground-breaking immersive Perpetual Collection pop-up concept has been installed at Taiwan Taoyuan Airport Terminal 2. The event is running at the location from 8th December to 28th February. “Taiwan is an educated market, well known for its sophisticated connoisseurs who understand the significance of craft, and have long enjoyed premium whisky offerings,” noted Quentin Job, William Grant & Sons Regional Director, GTR – Asia Pacific & Middle East. “Single malts are enduringly popular, and now account for around 70% of total whisky sales, so naturally we see significant opportunities here for our travel retail exclusive Perpetual Collection – especially as Glenfiddich is such an established, favourite brand among discerning Taiwanese consumers. “This collection is Glenfiddich’s biggest launch in global travel retail in the last decade, and is perfectly timed to capitalise on the opening up of Asia, and the Taiwanese travel retail recovery. The significant investment we have made to launch The Perpetual Collection across both airport terminals – supported by the installation of our immersive pop-up discovery experience in T2 – is a testament to our support of, and confidence in, this key market.” Featuring four single malt whiskies, each matured within vats that have never been emptied, adding continuous layers to flavours, The Glenfiddich Perpetual Collection began its global travel retail roll-out in August 2022. The corresponding immersive pop-up concept made its debut in Singapore Changi Airport, in association with Lotte Duty Free, in September. Subsequent airport locations have included Amsterdam Schiphol and Miami International. “To provide valuable and delightful shopping experiences is important to Ever Rich, so we are very excited to partner with William Grant to launch The Glenfiddich Perpetual Collection in Taiwan travel retail,” noted Ever Rich Duty Free Vice President Patricia Wang. “The Taiwanese are one of the top consumers of single malts in the world, and are happy to pay a premium for high quality, exclusive products. It’s a real pleasure to introduce this unique collection in-store.” “The initial sales results have been extremely promising,” added Gary Chau, General Manager of Tasa Meng Duty Free. “Now that the Taiwan borders are open, international travellers are excited to see this pop-up shop, which has proved hugely effective at engaging travellers, and maximising the awareness and visibility of this innovative new single malt collection.” Every traveller that enters the pop-up at Taiwan Taoyuan has their movements captured by motion sensors and projected in waves of colour onto a digital screen, thereby creating a unique piece of evolving generative art that references the pioneering Solera Vat process by which the whisky is made. Guided by a Brand Ambassador, pop-up visitors are then invited to sample the four distinctive Glenfiddich Perpetual Collection expressions. “We are thrilled by the traveller response to the Taiwanese launch of the Glenfiddich Perpetual Collection,” concluded Job. “We have received a lot of great comments about the vibrant packaging design, and of course about the new whiskies themselves, all of which are exceptional liquids with distinctly different flavour profiles, created using our special Solera Vat maturation process. “Our pop-up personalisation service, which allows travellers to customise their chosen bottle with a written or recorded message via QR code, has also proved especially popular for Christmas and Chinese New Year gifting.” Notes to editors: ABOUT GLENFIDDICH Founded in Dufftown, Scotland by innovator William Grant, Glenfiddich first ran from the stills on Christmas Day, 1887. Adopting revolutionary methods and practices Grant’s maverick attitude to whisky production saw Glenfiddich excel for over a hundred and thirty years, becoming the first single malt whisky to be promoted outside of Scotland, and ultimately, the best-selling and most awarded single malt whisky in the world. While Glenfiddich is now sold in over 180 countries across the world, the brand is one of the few single malt distilleries to remain entirely family-owned and is still produced in the same distillery which William Grant and his children hand-built. William Grant, founder of Glenfiddich, was one of the pillars of the Dufftown community in 1887. He is most famous for owning his own distillery, but he also had a wide range of interests beyond whisky. He was a Major in the local Volunteer Militia (forerunner of the Territorial Army), which was a popular activity throughout Banffshire in the Victorian era. He was also Precentor (the person who led the singing in church) at their local Dufftown church. As time went on, he was one of the biggest employers in the area.