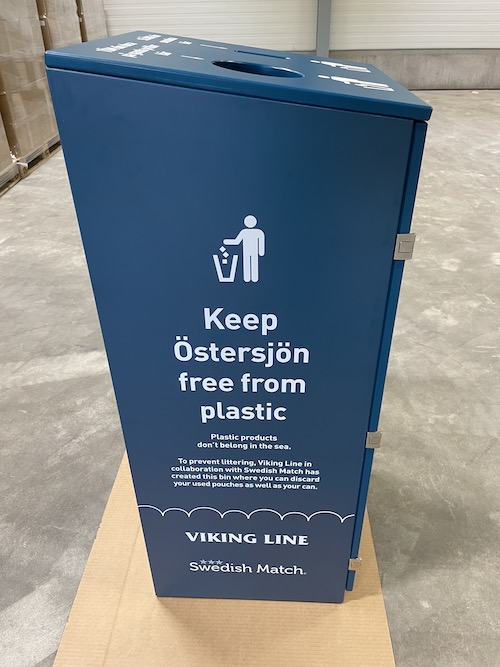 Swedish Match and Viking Line have launched a dedicated campaign to increase recycling and sustainability on the high seas with the launch of new bins for users of Swedish Match nicotine pouches and snus, including the ZYN brand which recently launched in travel retail. The custom-made bins, which initially rolled out on Viking Line’s Grace and Amorella ships, are clearly marked and come equipped with dedicated recycling slots for the used Swedish Match nicotine pouches and another for the cases. This ensures that none of the Swedish Match ZYN, nicotine pouch or snus product are creating additional waste in the seas and oceans and forms part of the brand’s wider efforts to tackle waste and climate change around the world. Swedish Match believes in a world without cigarettes, and since 1999 the company has worked towards the belief that snus and smokeless alternatives can lead the market with products that are significantly less harmful than cigarettes. At the heart of this offer is ZYN, one of Swedish Match’s nicotine pouch brands, which is poised for a rapid expansion in the travel retail sector after seeing great success in the domestic market. Now, with this new partnership with Viking Line, Swedish Match is bringing one of its other core beliefs to the travel retail market: A belief in a better, cleaner, more sustainable world. Jimmie Kreuzahler, Swedish Match Sales Manager said: “At Swedish Match, our sustainable beliefs and efforts are as much a part of our company and our business plans as our drive to create a world without cigarettes. “This partnership with Viking Line shows that sustainability is not just a word for us, but an ideal which we are constantly seeking new, innovative and effective ways to realise further. I would like to thank our friends and colleagues at Viking Line for their hard work in helping to bring this project to life.” Sustainability is an integral part of the Swedish Match business. Last year, leading ESG rating index MSCI once again named the company as a leader within the sector in the areas of corporate governance, product safety and quality as well as supply chain labour standards. Swedish Match has been a key contributor to the development of the new Sustainable Tobacco Programme and in 2020 secured a 7% reduction in CO2e emissions year-on-year, as well as 49% of energy use being free of fossil fuels. Looking to the future, the company has set itself key goals to reduce its environmental impact. These include a pledge to reduce greenhouse gas production by 41% by 2030, and by 75% by 2050, compared to 2017. This will be achieved by reducing greenhouse gasses by 5% every year. Reducing consumer waste is also a key target and it is here that the new partnership with Viking Line plays an important role. Viking Line Sustainability Manager Dani Lindberg said: “Sustainability and fighting climate change are a huge part of our business here at Viking Line, as evidenced by the production of our new vessel Viking Glory, which is one of the world’s most climate-smart passenger ships. “This partnership with Swedish Match is a brilliant, simple and innovative solution to reduce waste and cut down on plastic pollution in our oceans.”