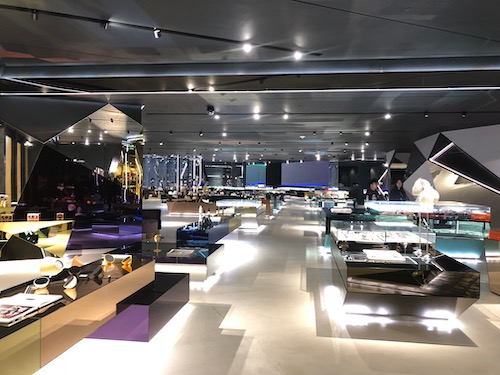 Airport retail operator Schäfer Group will take its Move store brand into the Macau tourist market this September via a partnership with Canudilo International, which will operate the 200 sqm shop inside the Sands Parisian resort. Canudilo International has a 3,200 sqm duplex store named Antonia in the Sands Parisian, as well as ten other Sands Macau properties. The new standalone Move store will sell products across categories, including sound, mobile, computing and healthcare. The offer is a broader, more upmarket range than what is currently available in Move’s European airport stores and allows more space for the brands stocked to stand out. With an electronic point of sale throughout the new store, strong digital elements will feature, allowing Schäfer and its partner to change the message to match passenger flow and target buying groups. Furthermore, with the content managed centrally, the plan is for promotions to be created for specific occasions, large and small. As part of its digital strategy alongside Canudilo, Schäfer will also roll out its Dynamic Content Play platform, which takes cues from customer actions to display information that matches their requirements. Schäfer Airport Retail Managing Partner John Woodhouse is bringing his own experience of the market, having spent ten years working in travel retail in China and Hong Kong. During this time, he worked on numerous projects in Macau, including within the Sands Parisian. He said: “We are going into the project with specific market knowledge under our belts. Our partners have operated within the Parisian since opening, so know the customer base well.” Woodhouse explained the scale of the opportunity in the Macau market: “Macau is a top holiday destination for southern Chinese tourists, especially from the wealthy greater bay area of Guangdong province. It is only 45 minutes away from Guangzhou, which has a 15m population, twice the size of London. “The Macau resort concept is very similar in many ways to an airport-style business in that thousands of travellers are delivered to the store daily, either through staying in hotels or coming for shopping trips. The difference is that the dwell time is longer, and shopping is central to the visit. Like Hong Kong, Macau is a Special Administrative Region with differing regulations to China, allowing for duty free. “In 2019, Macau saw just under 40m tourists, and if that number can be reached by 2023, which we strongly believe it can, we will be pleased.” Asked about the broader long-term strategy for the Move brand, Woodhouse said: “Taking the Move brand beyond airports was always part of our plan, and we hope to announce in due course an exciting project for five stores in the Gulf. “In Germany, we have also taken Move into traditional retail, where we are rolling out the concept as a shop-in-shop within a hypermarket chain. We opened our first two locations in late May, and sales are promising.” The Sands Parisian Casino – which opened in 2016 – is part of the extensive Sands Group operations in Macau, housing 3,000 hotel rooms. Its owner identified Paris as a key tourist driver for Chinese tourists. The resort boasts a spectacular replica of the Eiffel Tower and has shopping streets themed and named after the famous Paris boulevards.