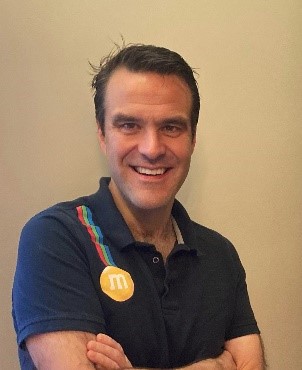 Mars Wrigley ITR’s Marcus Hudson, currently Global Customer Development Director in ITR, has been appointed to the role of Sales Director ITR as of January 17th. In this role he will lead the continued recovery of Mars Wrigley’s global travel retail business, reporting to Jack Tabbers, General Manager. In his new capacity he will join the NL/ITR leadership team. Marcus is a seasoned professional with deep knowledge of the travel retail industry. His first role (2007) was Trade Marketeer global travel retail for BAT and he has been expending his expertise in global FMCG ever since. He joined the business in 2016 as Customer Effectiveness Manager in ITR and was promoted to his current role in 2019. Mars is confident that with the world of expertise Marcus brings and his vast experience, he will continue to deliver quality growth. Marcus’s achievements within ITR are diverse including implementing Mars Wrigley’s current customer-centric structure. Marcus’s proudest achievements include building a very high engagement level within his team during the pandemic, and ongoing Airport customer recovery with better than ever relationships with many of our key partner customers. Jack Tabbers says: “Taking this opportunity, I would sincerely like to thank Raghav Rekhi, who’s assignment with NL/ITR will end on January 15th, he will return to his home unit of Dubai.” Raghav moved to the Netherlands in 2018 to join ITR first as Marketing Director and later into the role of Sales Director, and he demonstrated leadership in simplifying Mars Wrigley’s portfolio and driving the unit’s growth. Most recently he has overseen ITR’s recovery, which has put it ahead of the category recovery rate. Tabbers continues: “Throughout his work, Raghav’s commitment to delivering results, his passion for developing talent, coupled with a strong collaborative approach and ambassadorship of our culture have shone through and he will be much missed by the unit.”