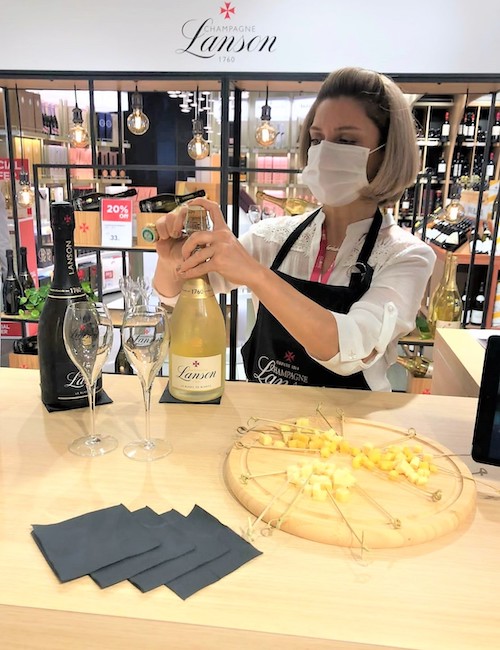 Champagne Lanson’s two-month bistronomie activation at Nice Airport T2, in partnership with with Lagardère Travel Retail, has been declared a massive success, proving the value of customer engagement to drive sales. During September and October, the HPP promoted Lanson’s most recent cuvées: Le Black Réserve and Le Blanc de Blancs, along with Le Rosé, via live tastings paired with different French cheeses. As an added incentive, travellers were offered a price off on purchases of Le Black Réserve, Le Blanc de Blancs, Le Rosé, and Twin-packs (TR exclusive). Says Lanson Head of Travel Retail Edouard de Boissieu: “Despite passenger numbers still being quite low, the activation was an amazing success with sales of Champagne Lanson seeing a twelve-fold increase on the same period in 2019. This really was beyond our expectations and just goes to show the value of promotions which engage directly with passengers. We are extremely pleased with the results and now hope to repeat the activation in other key airports during 2022.” Adds Lagardère Travel Retail Victoire GUEUGNIER, Director Merchant Beverage: “Since July, traffic has been recovering in south of France with notably European passengers and the mood of consumers was certainly very positive. The timing of the Champagne Lanson activation was perfect, but what made it particularly attractive was the gastronomy story that the brand created through food pairing. The use of tasting was a big plus and certainly helped to make the HPP a success.”