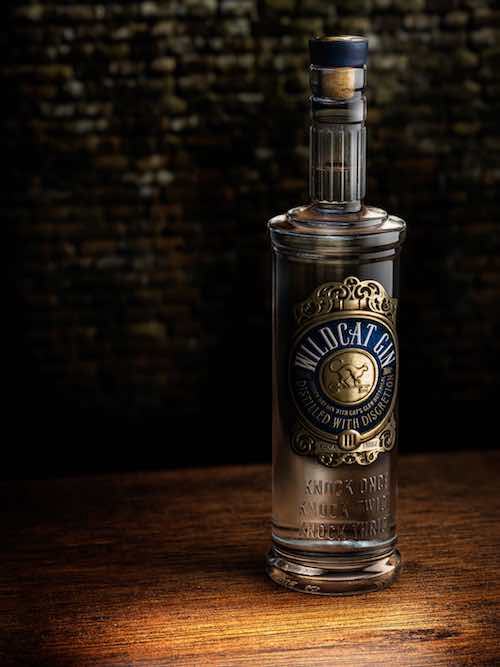 In line with its commitment to innovate, invest and inspire, Whyte & Mackay unveiled two new contemporary spirits brands at the 2018 TFWA Tax Free World Exhibition in Cannes (Green Village: M52). The award-winning spirits producer is making its debut in the premium gin category with Wildcat Gin, which launched in the UK in September and will be rolled out into travel retail in 2019. Whyte & Mackay also introduced its new Blended Scotch Whisky, The Woodsman, which was launched in the UK in August, with a pop-up Tipi Bar at this summer’s Edinburgh Festival Fringe. Wildcat Gin is the latest introduction from an impressive pipeline of innovation that has enhanced the company’s portfolio with a selection of new brands that consumers believe are worth paying more for. Other highlights this year include the successful global launch of the new Jura Sherry Cask Travel Retail Collection; a full rebrand and relaunch of Tamnavulin Speyside Malt; and the rebirth of rare Highland Single Malt Whisky Fettercairn. Wildcat Gin will allow Whyte & Mackay to further diversify its product offer, and establish a meaningful presence within a flourishing spirits category. The brand story originates from the 18th century, when gin was so popular it was outlawed. At the time, Captain Dudley Bradstreet – a rogue and adventurer – arrived in London and set up a scheme to sell gin in secret. He hung the sign of a black cat over his window, and let it be known that by knocking three times, a generous measure of gin would be dispensed once money was placed inside the cat’s mouth. Before long, cat signs began to appear all over the city, and a new gin craze was born. Wildcat Gin has an ABV of 41.5% and is distilled especially for mixing, using ten carefully-selected botanicals – including Liquorice Root, Coriander, Angelica Root and Cat’s Claw Root – making it the perfect serve at home or in a bar. It has a classic, refreshing, crisp gin taste, with a predominantly juniper aroma. This is enhanced by subtle hints of citrus, white pepper and spice, courtesy of the Cat’s Claw botanical. The Wildcat Gin bottle has been designed with mixing in mind, featuring grip points at the neck which allow for a speedy pour. The brand’s story is also incorporated within the design, with “Knock Once. Knock Twice. Knock Thrice” embossed on the front of the bottle below the distinctive gold logo. Wildcat Gin is being positioned as the go-to gin for vibrant, after-dark occasions. Imbued with mystique and style thanks to its illicit brand story and distinctive bottle design, it invites consumers to #SeizeTheNight. “We are hugely excited about this entry into a booming gin category,” commented Whyte & Mackay Director Global Travel Retail Richard Trimby. “Instead of developing yet another niche, local brand focused around strange botanicals, we are targeting an occasion and mindset that most gin brands are not. With its compelling back story and standout packaging – allied to our ability to create distinctive consumer activations – we are convinced that Wildcat Gin has the potential to become a big brand within the travel retail channel.” In other news, Whyte & Mackay presented The Woodsman Blended Scotch Whisky at Cannes. This exciting new addition to the company’s growing portfolio aims to recruit new, younger drinkers into the Scotch category, by giving traditional blend behaviours and flavours the chop. As its name suggests, The Woodsman has woodcraft at its heart – from its maturation process to its premium packaging. It is matured using a mix of freshly-built oak casks from Ohio, which gives it a hint of vanilla and spice, and ex-Bourbon barrels double-scorched in Scotland for an extra depth, adding more vanilla sweetness and a hint of woodsmoke. This transatlantic partnership makes for an especially smooth whisky and gives The Woodsman a truly unique flavour profile for a blended Scotch, crafted with younger brown spirits drinkers in mind. The Woodsman has an ABV of 40% and is the perfect whisky for mixing – bold yet balanced, rather than with a subtly nuanced or overly complex taste. Recommended serves for the new whisky include a Maple Syrup Old Fashioned, a Woodsman & Ginger Beer, or simply mixing with cola. The whisky’s tree-inspired bottle with debossed and embossed detail captures the spirit of the great outdoors and gives The Woodsman a stylish look and exceptional back bar stand out, especially with younger consumers looking for something different. “We believe The Woodsman is a true category disrupter, and we’re excited to introduce this contemporary new spirit to the travel retail channel,” noted Trimby. “We know that traditional Scotch category cues can be a turn-off for younger consumers, so we’ve worked hard to appeal to this segment by creating a blended Scotch with a unique flavour profile and an interesting, innovative production story. We’re confident that The Woodsman will stand out as a differentiated offering against mainstream brands, add value to the category – and help to drive our travel retail business forward.”