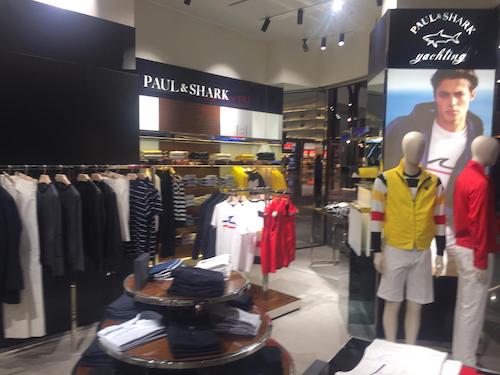 Italian fashion brand Paul & Shark has opened two new retail spaces at the New Istanbul Airport in Turkey. A monobrand 46 square metre boutique has opened for business in the airport’s Zone 1 retail area and the brand also has its own 60 square metre dedicated corner in Zone 6, the area known within the airport as Fashion Garden. At the latter location its near neighbours include other well-known fashion names such as Michael Kors, Emporio Armani, Monclear and Ermenegildo Zegna. Both retail spaces feature Paul & Shark’s latest high-fashion collections within the brand’s new eye-catching concept that capitalises on the iconic shark logo through use of video monitors and stand-out gondolas. Sleek store design and captivating visuals create a truly standout location. The airport’s first phase of construction, which includes three runways and 15 million square feet of terminal space, including these retail zones, is now completed. The airport can handle 90 million passengers a year in the current phase of development, rising to an amazing 200 million after completion of all phases. Paul & Shark Global Travel Retail Director Catherine Bonelli said: “Being a part of this amazing airport project has always been our agenda, and we are pleased to achieve it with not just our own great-looking monobrand store, but also a significant presence in Fashion Garden’s Zone 6. “Istanbul New Airport is already a huge airport in terms of passenger traffic and the fact its capacity will more than double in the long-term makes it a powerful location for our brand’s sales and awareness. Istanbul New Airport is right up there with the best shop windows for brands in global travel retail. Istanbul as both a destination and an important global hub has always been a strategic location for Paul & Shark. The INA is placing Turky and Istanbul as one of the world’s most dynamic and progressive airports and we are delighted to be present. ”